This thick & creamy raspberry smoothie recipe is incredibly easy and healthy! It’s made with almond milk and Greek yogurt, all without any banana!

If you’ve been following my website for long enough, you know how much I love a good smoothie. Most of my smoothie recipes are high in protein and are meant to be enjoyed as a complete meal.

However, this raspberry smoothie is just a sweet treat that my toddler and I have been enjoying this summer on afternoons when it just seems too hot to eat anything.

Plus, she loves the pink color and so do I. It’s actually difficult to drink it because it’s just so beautiful!

With only a few simple ingredients, you can whip this healthy raspberry smoothie together in about 5 minutes! So, if you’re looking for an easy and nutritional smoothie for the end of summer, you’ve come to the right place!

This raspberry smoothie is made without banana, which means it tastes like raspberries and really nothing else!

It’s smooth, creamy, and really thick, with some sweetness from the maple syrup that balances out the tartness of the frozen raspberries. This smoothie is a little seedy just because of the raspberries, but it’s so delicious and creamy, you won’t really mind!

Unsweetened almond milk – A lower calorie milk that doesn’t really add any flavor but adds a little bit of creaminess.

Full fat coconut milk – This adds some coconut flavor to the smoothie, and also helps to make it extra creamy!

Maple syrup – Because raspberries tend to be really tart, especially frozen, you’ll likely need to add some sweetener to balance that tartness out. Maple syrup adds sweetness without overpowering the raspberry flavor, and is an all natural sweetener!

Frozen raspberries – This recipe can actually be made with any frozen berries or fruit. Blueberries, blackberries, strawberries, mango, peaches, cherries, and pineapple would all work really well in this recipe. Fresh fruit would also work, but you may need to add a lot of ice to make it thick and not so watery.

Almond milk – You can use any type of milk you have on hand. Dairy milk, cashew milk, oat milk, rice milk, soy milk, or coconut milk all would work just fine. You could even use a chocolate flavored milk for a raspberry chocolate smoothie.

Full fat coconut milk – If you want to reduce the calories in this raspberry smoothie, you can eliminate the coconut milk and substitute in more almond milk, or just use a lite coconut milk instead.

Maple syrup – Any sweetener will work for this smoothie recipe. Honey, agave, coconut sugar, stevia, or monk fruit could all work. However, if you’re changing up the sweetener, I would start by adding just a little bit at a time, as it probably isn’t a 1:1 ratio when subbing out maple syrup.

Like most smoothies, this raspberry smoothie is best to drink immediately after you eat it. Smoothies tend to melt and separate, even when left in the fridge.

With that being said, you can always freeze it in popsicle molds for a healthy raspberry popsicle if you want to! Grab the same set of stainless steel popsicle molds that I use here!

How do I make my smoothie creamy?

Ingredients that will make a smoothie creamy are frozen fruit, coconut milk, yogurt, avocados, and bananas.

What makes a smoothie thick?

The more frozen fruit or ice you add to a smoothie, the thicker it will become. By adding 2 cups of frozen raspberries to this raspberry smoothie recipe, you ensure that it is really thick and creamy!

What are the benefits of raspberries?

Raspberries are extremely high in antioxidants, vitamin C, and fiber. They’re a great boost of vitamins and minerals, and are known for being associated with a decreased risk of cancer and heart disease!

If you’d like to cut the carbs down, you can use stevia or monk fruit sweetener instead of maple syrup! Or, if you can tolerate the tartness, you can use less maple syrup or eliminate instead.

If you want reduce the calories in this recipe, use 1 cup of unsweetened almond milk and eliminate the coconut milk. It won’t be as creamy, but it’ll still taste really good!

With a boost of vitamin C and antioxidants, this raspberry smoothie makes the perfect healthy snack for a hot summer day!

This is what I personally paid to make this recipe:

Total for this raspberry smoothie recipe comes out to be $3.11 or $1.56 per smoothie! 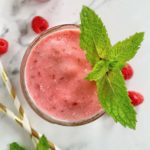 This healthy and easy raspberry smoothie is the perfect afternoon summer treat! Now, go grab your blender and some frozen raspberries, and make this smoothie before summer ends! 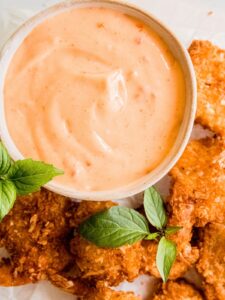 Bang bang sauce takes about one minute to whip up, and is perfect to use as a shrimp sauce, for chicken tenders, and even on vegetables! Let me ...