Honey orange shrimp is Asian-inspired and totally delicious. In less than 30 minutes, you’ll have this shrimp in orange sauce on the table!

If you’re anything like me, you love to grab Chinese take-out every once in awhile.

But as delicious as it is, Chinese take-out is probably one of the worst things you can eat. It’s loaded with salt, sugar, MSG, and all kinds of artificial additives and flavors that can leave you feeling bloated and hungover the next day.

Fortunately, there are ways to make your favorite take-out foods healthier, more natural, and all-around nutritious.

I give you honey orange shrimp. By using real oranges, honey, and fresh ginger, you can make some seriously delicious shrimp in orange sauce in less than 30 minutes.

Orange shrimp is sweet, sticky, and super delicious. The sauce is slightly thickened, so it just sticks so well to the shrimp and stir-fry vegetables.

If you’ve never had orange shrimp, think about the kind of sauce that comes on orange chicken. Now, imagine that sauce covering sauteed shrimp and vegetables. So tasty!

Sesame oil – This is a key flavor in this recipe. Sesame oil adds an Asian-style flavor that can’t be replicated. You can buy it at most grocery stores, around where they keep the coconut milk and Sriracha sauce.

Shrimp – Make sure to use a medium-to-large sized shrimp. I used 21/25 shrimp, meaning there are 21-25 shrimp per pound. I also use precooked shrimp, but you can use raw as well.

Garlic – A must-have ingredient. Garlic adds a lot of flavor to this shrimp recipe.

Soy sauce – This balances all the sweetness from the honey and orange flavors, and adds a nice savory flavor to the orange sauce.

Honey – This adds most of the sweetness to the sauce, and it is an essential flavor for this recipe. If you have a toddler under 2, make sure to use pasteurized honey. And remember, babies under 1 year old cannot have honey at all.

Orange – You will use both the zest and the juice from an orange, and I would suggest you zest before you juice it. It’s much hard to zest an orange you’ve already squeezed!

Fresh ginger – Such an awesome flavor, fresh ginger adds a lot of flavor in very small amounts. If you don’t have fresh ginger, you can use dried ginger, but only use about half the amount the recipe calls for.

Corn starch – This will ensure the orange sauce is thick and sticks to the shrimp and vegetables evenly.

Carrots – Make sure to shred these or cut them up matchstick style. They will cook faster and also look really pretty if you do.

Bell peppers – Cut them up fajita-style!

Yes it does! Similarly to other types of meats and seafood, cooking shrimp kills the bacteria found on and in the raw shrimp. Make sure to heat your shrimp to 145 degrees to kill any harmful bacteria.

What is orange sauce made of?

Orange sauce found at Chinese restaurants is typically made with loads of sugar, oils, MSG, and sometimes artificial flavors and ingredients.
By making orange sauce from scratch with natural ingredients, you can feel good about skipping the take-out without sacrificing any flavor!

How do you make orange sauce from scratch?

Simply whisk together orange juice, orange zest, garlic, ginger, soy sauce, honey, and corn starch. Heat it up on medium heat until it thickens, then remove from heat. Voila! Orange sauce from scratch!

Do I have to devein and remove the tails from my shrimp?

According to most of the seafood industry, deveining and removing the tails from your shrimp is optional, and just based on your preference. I personally like to devein and remove the tails from my shrimp so I don’t have to do so while I’m eating.

This healthy orange shrimp recipe is low calorie, low sodium, and has a good amount of protein.

It’s also free of artificial flavors and harmful additives that most take-out restaurants serve. I love natural, whole foods, and I’m willing to bet you do, too!

To keep this recipe low sodium, look for frozen shrimp that have less than 200 mg of sodium per serving, and make sure to use low-sodium soy sauce, too!

This entire recipe costs about $9.97, or roughly $2.49 per serving. The most expensive part of this recipe is the shrimp, at just about $6.50 per lb here in Oregon. Even though that’s a pretty expensive protein, it’s still very budget-friendly compared to ordering take-out!

All in all, it’s so much cheaper than you could get at a Chinese restaurant, and so much healthier, too!

You may be asking yourself, “what goes with orange shrimp?”. Here are some side ideas: 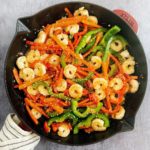 Orange shrimp with stir fry vegetables is one the most flavorful and easy seafood recipes you’ll ever make! Skip the take-out, and eat out at home this week!

Making London Broil in the Crockpot yields a juicy, fork-tender roast beef swimming in a luscious, herby brown gravy, all with only 11 ingredients and ...