Cinnamon roll donuts are whole wheat, healthy, and covered with a cinnamon crumble and vanilla glaze. They’re perfect for a holiday brunch!

Is it just me, or do you start craving cinnamon rolls around the holidays?

I definitely do, but I also love donuts, so I combined cinnamon rolls and donuts into one delicious baked good that is sure to satisfy your craving!

These cinnamon roll donuts are whole wheat, healthy, and full of cinnamon flavor! They’re fluffy and moist, and are covered in delicious cinnamon crumble you won’t want to skimp on! Now let’s get baking!

These cinnamon roll donuts are fluffy and moist and have a delicious cinnamon flavor. The vanilla glaze on top makes them even more like cinnamon rolls, so these are sure to be a hit this holiday season!

Coconut sugar – The main sweetener in both the cinnamon donut batter as well as the cinnamon crumble on top! It’s a healthier alternative to other, more processed sugars.

Baking powder – The leavening agent in the donuts, don’t skip it or your donuts won’t rise!

Cinnamon – They wouldn’t be cinnamon roll donuts without cinnamon!

Almond milk – I like to use unsweetened vanilla almond milk because it’s light and doesn’t make anything oversweet.

Egg – You’ll only need one egg for this recipe, but it adds moisture and helps given the cinnamon roll donuts a nice texture as they bake in the oven.

Plain Greek yogurt – This ingredient gives the donuts a little protein and some moisture, too!

Avocado oil – A heart-healthy oil that works great in this baked donut recipe!

Powdered sugar – The base for the vanilla glaze. I use organic powdered sugar which is made with tapioca flour instead of corn starch.

Coconut sugar – Any sort of granulated sugar can work in this recipe. Brown sugar and white sugar would work great in place of coconut sugar.

Almond milk – Feel free to use any plant or animal-based milk in these cinnamon donuts.

Egg – If you’d like to omit the egg, simply make a flax egg instead! You can do this by mixing one tablespoon of ground flaxseed with two tablespoons of water and setting it aside for about 5 minutes, allowing it to gel up.

Avocado oil – Any liquid oil will work in this recipe, you could even substitute in applesauce instead of using oil at all.

Are cinnamon rolls and donuts the same thing?

They’re very similar but not exactly the same! Cinnamon rolls are more like buns, and baked donuts are more like a type of muffin shaped like a donut.

How long do these cinnamon donuts last?

You can store these at room temperature for up to 2 days!

What is better, baked donuts or fried donuts?

In terms of health, baked donuts are the way to go. They’re typically lower in fats because they skip the frying part altogether. Fried donuts are very delicious but much higher in calories and fatty oils.

Not only are these baked cinnamon donuts 100% whole wheat, they’re also fairly low in carbohydrates (for a donut) and extremely low in sodium with only 21 mg of sodium per donut!

This is what I personally paid to make this recipe:

The total to make these cinnamon roll donuts comes out to be around $3.56 for the entire batch or roughly $0.45 per donut! 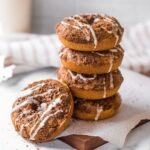 For the Donut Batter:

For the Cinnamon Crumble: 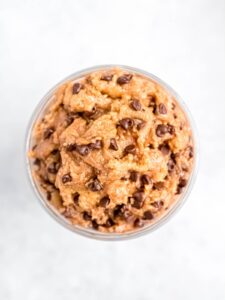